Artificial intelligence and super computers possible “In less than 100 years”

Elon Musk calls it the single biggest threat to the survival of the human race. Stephen Hawking says that in the next 100 years “computers will overtake humans and we need to be prepared”.

If some of the brightest minds and thought leaders around today think we need to be worried, who are we to argue?

Artificial intelligence (AI) is the human-like intelligence that machines or computers can exhibit. This does not mean someone programming a machine to behave like a human but a machine which can make its own decisions similar to that of a human. Sure, we have many super powerful computers and robots with human-like features and actions, but this is still mimicry combined with smart programing. So how far are we from science fiction becoming a reality?

Hawkin’s comments came from a talk he gave at the Zeitgeist 2015 Conference where he said “Computers will overtake humans with AI at sometime within the next 100 years. When that happens, we need to make sure the computers have goals aligned with ours.”

Hawkins agreed with Musk’s take on the issue, as did Bill Gates, that we need to be wary of AI and of machines that we create becoming too smart.

Not everyone is afraid, Google CEO and cofounder Larry Page thinks AI will benefit the economy and that the rise of intelligent computers playing a more active role in the economy is almost inevitable.

While real AI is still a distant aim, there is no doubt that it’s where we are heading. The problem is what happens when we get there, and what should we do to prevent some futuristic robot takeover becoming a reality?

Says Musk, “I’m increasingly inclined to think that there should be some regulatory oversight, maybe at national and international level, just to make sure that we don’t do something very foolish.” Scary stuff, especially when coming from someone who builds space rockets and whose idea of travel for the future is a Hyperloop.

So while Musk warns against AI he is also one of many high-profile investors, Facebook CEO Mark Zuckerberg is another, investing in a company called Vicarious. Vicarious is attempting to build a computer/robot that thinks, talks and moves like a human. 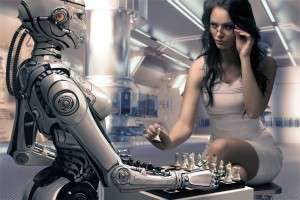 The problem is not so much that we can create robots with human intelligence, because as smart as we think we might be, we clearly aren’t. The problem is, according to well-known AI expert Nick Bostrom, that “machines will quickly overtake humans in terms of intelligence,” and that there’s a “decent probability” that machines will eventually outsmart humans.

He goes on to say ““I personally believe that once human equivalence is reached, it will not be long before machines become super intelligent after that.” He explains that while it may take a 100 years or so for robots to achieve human intelligence, after that, achieving a level of super intelligence might not take so long.

While real AI is still a long way off, there are already AI-like devices playing a role in our lives. Just look at Apple’s Siri and Google’s self-driving vehicles, which rely on some measure of AI. In addition, it has been reported that there are more than 150 start-ups in Silicon Valley alone that are currently working on AI.

In order to consider a future when something more intelligent than us comes along, we only have to look at what happened on earth when the human species evolved into what we are today. Like humans, super intelligent robots could solve a lot of problems but they could also cause more than they solve.

In the meantime, while we wait, why not get as close as you can to the virtual world with some of the best gaming computers on the market.